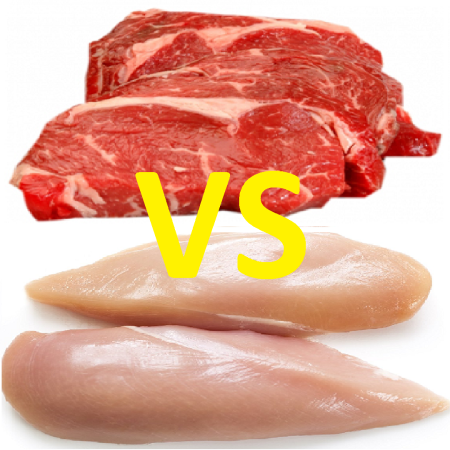 Have you ever looked at a piece of raw chicken and a piece of raw beef and thought “why is one white and the other red?” or even “Why is a chicken so much faster than a cow and what dictates that?”. Probably not to be fair, but this is a great example to illustrate the visual differences when it comes to the differing muscle fibre types.
To start with if you ever decide you are going to try break Usain Bolts 100 or 200 metre records the fact of the matter is unless you are already equipped with the necessary genetics it is always going to be a very slow start (pardon the pun). You may also know of someone who doesn’t train very much but still seems to display huge amounts of strength and speed when called upon in a game or gym scenario. These particular people are freaks for want of a better word, they have a genetic makeup that consists of more fast twitch muscle fibres than the average person and can call upon them seemingly at their leisure. That isn’t to say you could never achieve a level of strength and speed that would be a huge improvement on what you can currently do of course but to be a top class sprinter or strength athlete this is generally going to be dictated by your parents and the genetics they have handed down to you. The following blog is an explanation of four different muscle fibre types along with their characteristics.
Muscle fibres are controlled by motor nerves (neurons) that are connected to motor units (collection of muscle fibres) and are recruited depending on the intensity of a given exercise. A motor unit may contain anywhere from hundreds to thousands of muscle fibres at a time. When a motor unit is recruited it calls upon all the muscle fibres it controls, it has an “all or nothing” approach. Despite controlling multiple muscle fibres, each muscle fibre that the motor unit controls is identical in nature ie one motor unit cannot control type I and Type II muscle fibres, it either has control exclusively of Type I or Type II fibres. Muscle fibres are generally broken up into two main types, Slow Twitch (Type I) and Fast Twitch (Type II) which consist of three sub-types (a,x and b).
Names: Type I, Slow Twitch Oxidative
Characteristics: Aerobic, Resistance to fatigue, Slow contraction times,Low Force
Colour: Red
Type I muscle fibres are aerobic in nature, this means they are the main fibres that you utilise when doing endurance events such as walking or jogging. They are the dominant muscle type used for everyday low intense activities. Their name Slow Twitch comes from the length of time they take to achieve peak contraction (110 milliseconds). These fibres are mainly red due to their high density of myoglobin which function as an oxygen transport system to the mitochondria (powerhouse of the muscle cell). Mitochondria and capillaries are more plentiful in slow twitch muscle fibres as they require a steady supply of oxygen to the working muscle in order to use the Aerobic Systems as discussed in a previous Blog here.
Names: Type IIa, Fast Twitch Oxidative
Characteristics: Aerobic/Anaerobic, Resistance to fatigue, High Force
Colour: Pink
Type II muscle fibres are larger than their slow twitch counterparts and take less time to achieve peak contraction (40-60 milliseconds). Type IIa muscle fibres are anaerobic and also possess aerobic qualities by having a higher density of mitochondria and myoglobin than IIx’s. They are, as a consequence, also less prone to fatigue than Type IIx and IIb. Main recruitment of these muscles takes place over an activity requiring sustained power and they are a pink colour.
Names: Type IIx, Fast Twitch Glycolytic
Characteristics: Anaerobic, Prone to fatigue, Maximum Force, Rapid Contraction
Colour: White
Type IIx fibres are recruited for high intensity high powerful activities eg sprints, one rep max work etc. This makes them the fastest contracting and largest muscle fibres of all. They are white in colour but are prone to fatigue and use exclusively anaerobic qualities ie alactic and glycolytic energy systems. They are capable of producing five times as much power as slow twitch fibres and are twice as powerful as IIa’s.
Names: Type IIb, Fast Twitch Glycolytic
Characteristics: Anaerobic, Rapid Contraction
Colour: White
Despite conventional thinking Type IIb’s are not common in humans and are thought to mainly exist in the eye socket only.
Further conventional thinking states that for low intense activities or activities at low speeds Type I muscle fibres are recruited and for high intense or high speed Type II’s are recruited. While in certain circumstances this is true what has also been shown is at certain lactate thresholds during aerobic activities muscle fibres are recruited in a progressive manner ie Type IIa’s begin recruitment at Aerobic Threshold and Type IIx’s begin recruitment at Anaerobic Thresholds. This obviously has training considerations going forward especially if certain training exercises are designed to target certain muscle fibres.
To sum up, the difference in colour between a breast of chicken and a raw piece of beef is mainly down to fibre type. A chicken will get to the line faster but will also generate fatigue faster so in an endurance race the cow may be at a slightly better advantage. The only hassle you may find is trying to prove that……..food for thought anyway(pardon the pun)!
Steve
#raisethebar