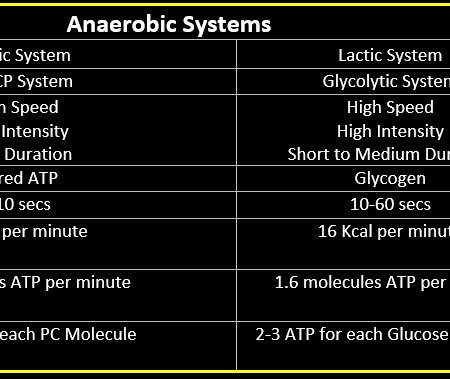 For my first blog I decided to write a very general approach to energy systems. Understanding these components is key to improving the conditioning of any team, athlete or individual and yet many “conditioning/fitness” coaches are not aware of them. In the blogs following I may go into these in more detail including how to train for these systems but if you are looking for further papers and readings on the topic I can’t recommend Joel Jamieson, Martin Bucheitt, Lyle McDonald and Joel Jamieson (yes, I said him twice) enough.

To start off with there are three main energy systems. The body does not use each one exclusively but rather uses them collectively depending on the intensity required. At various times one energy system will become dominant over the others again depending on the intensity of exercise. Despite the three differing energy systems they all produce a chemical called ATP albeit through different pathways, this chemical is basically the “currency” with which all muscles contract. The details of the pathways will be beyond the scope of this blog but again maybe something discussed in later blogs.

The first system discussed is recruited when an activity is at its most intense, this may occur through a high intense or high-speed movement such as attempting a one rep max or when performing a full-on sprint. It is fuelled through available ATP in the muscle and when the system is given adequate time to refuel is ready to go again. What is deemed adequate will generally depend on the levels of aerobic fitness the athlete possesses. The body or muscle group being used needs suitable rest to replenish ATP stores. For example, if one was to sprint 100 metres then take a ten second rest and repeat the sprint there would be insufficient time to replenish stored ATP and so another energy system would need to take up the slack. The alactic system is the most powerful system so the consequence of restricting this rest period is that trying to repeat a sprint time multiple times with minimum rest would not realistically be sustainable due to the system not being given adequate time to recover. Most field sports may call on this system multiple times in a game. The name Creatine may be familiar to some people from the popular and most researched supplement (over 800 studies) Creatine Monohydrate. A chemical called phosphocreatine is responsible for the rapid refuelling of this system and supplementing with Creatine Monohydrate has been shown to increase phosphocreatine stores and so aid this system. This chemical converts the ADP (adenosine di phosphate) back into ATP (adenosine tri phosphate) in order to replenish stores.

The second system is dominant when the duration of a high intense activity exceeds 10 seconds. This system is not as powerful as the Alactic system and is fuelled through available glycogen or glucose (carbohydrate) in the muscle. Activities that would utilise this system include swimming, kayaking, sprinting (200/400 metres +) etc. This particular energy system may be best known for one of its by-products, lactate. This chemical is seen falsely as the chemical that causes short and long-term pain and soreness in the muscles. This old school way of thinking is still prevalent with many coaches but is not accurate. Lactate is normally cleared from the muscle within an hour or so after strenuous training. This by-product, in fact, can be used as a secondary fuel source during training for the cardiac and pulmonary muscles aswell as Type I muscle fibres in a process known as lactate shuttling. Aerobically driven muscle fibres and especially the heart as a muscle itself can use lactate as its primary fuel source during exercise. What causes the discomfort and pain in muscles during intense training is not completely understood but is believed to be an increase in acidity in the muscle cell caused by an increase in positively charged Hydrogen ions which also occurs with increases in lactic acid. Terms such as aerobic threshold, anaerobic threshold, sweet spot training and lactate threshold training are generally based around levels of lactate in the blood. How fast an athlete can clear lactate from the blood and muscles is one indicator for predicting his/her general fitness. Lactate is constantly present in the blood even at rest and what will determine the levels of lactate will be intensity and duration of exercise.

The aerobic system although not as powerful as the two anaerobic systems has the most capacity for work by efficiently producing the most ATP. It produces ATP aerobically (in the presence of oxygen) using carbohydrates and fats as its preferred energy source and if needs be can also utilise proteins. Because it goes through so many processes and actions this makes it the most complex, adaptable and trainable energy system. Lung and left ventricle capacity, capillary, blood vessel and mitochondrial density will all lead to an improved aerobic system. It has an added responsibility to refuel the anaerobic systems which is what makes it so important for overall fitness. The kings of aerobic fitness are endurance athletes, marathon runners, triathletes, ironmen competitors etc. The gold standard for measuring aerobic fitness is the VO2 Max test. This test looks at gas exchange levels aswell as max heart rate and lactate levels and is a measure of the athlete’s ability to consume and utilise oxygen. Populations with a high VO2 Max have been shown to have a lower mortality rate than others but studies have also shown this in terms of leg strength using squats. Conversely VO2 Max is considered to have a genetic ceiling in terms of its adaptability and other numbers such as lactate thresholds have been considered more changeable and trainable.

Hopefully this blog explains a little bit more about energy systems albeit in an overly simplistic way. Any thoughts and comments are more than welcome in the section below and each will be deleted and ignored in their own special way! Only messing 😉 Thanks for reading!