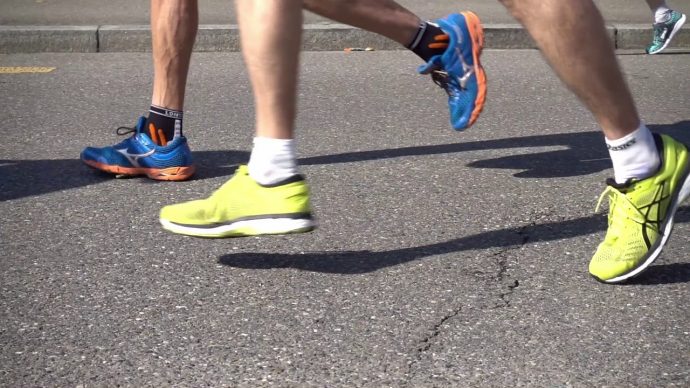 Detraining refers to “a partial or complete loss of training induced anatomical, physiological and performance adaptations, as a consequence of training reduction or cessation”(Bosquet and Mujika, 2012) This basically means when an individual or athlete is forced to stop training due to unforeseen circumstances such as injury, illness or in the current situation a global pandemic then fitness components will be lessened as time goes on.

When ENDURANCE training first ceases, for a period of 12 days (as studied by Coyle et al,1984), endurance is lost entirely due to the decrease in the amount of blood the heart pumps per beat i.e. stroke volume. This decrease comes about due to the rapid loss in plasma (i.e. blood cells) within the blood which is the opposite process that happens during a training program! Below is a graph of cardiovascular variables and the changes they go through during a period of detraining (Coyle et al,1984). 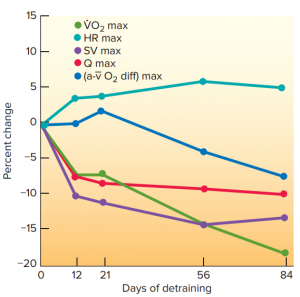 In addition to the loss of fitness components mitochondrial density is also decreased. Mitochondria are known as the “powerhouse of the cell”, put simply they are responsible for creating most of the energy currency for the cell. In the graph below (Powers and Holey, 2018) when an untrained population begin training initial mitochondrial density can INCREASE by as much as 50% however those achieved gains can DECREASE by as much as 50% after only one week of detraining (represented by the letter “a”). 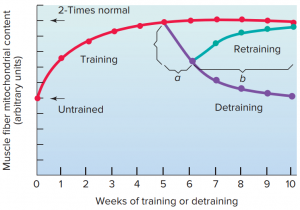 From there it will take a further four weeks to regain those gains which is another strong argument as to why you should try stay on top of your endurance training!

Another component to consider is the decreased percentage of Type 1 muscle fibers. As previously shown in another post the body defaults to Type 2 muscle fibers during a detraining period and consequences of this is a higher lactate threshold when training as well as the obvious decreased amount of endurance fibers available. Depending on the level of the athlete, endurance performance goes down anywhere from 4-25% after 3-4 weeks (Bosquet and Mujika, 2012).

So, what can we do? Fortunately studies have shown “that training-induced adaptations are readily maintained for several weeks during periods of reduced training FREQUENCIES (how often you train), but the reductions should be more moderate in athletes (no more than 20-30%) than in recently and moderately trained individuals (up to 50-70%)” (Mujika and Padilla, 2000a). In addition to this, “training VOLUME (how long you train) can be reduced to a great extent without falling into detraining. This reduction can reach 60-90% of previous weekly volume, depending on the duration of the reduced training period, both in highly trained athletes and recently trained individuals”. IT should be noted that intensity must be high when volume is low!